I haven’t missed a year since I started going, which I’m going to guess is maybe … fifteen years? (Estimating the passage of time has never been one of my strong points.) Anyway, it’s been a long time.

I was raised on bluegrass and bluegrass festivals, and while I confess that these days I go more for the people watching than the music, it’s something that is deep down in my blood and I’ll never be entirely free of it. And that’s not a bad thing.

And it makes me happy to see that there’s another generation being exposed to live music, just like I was. 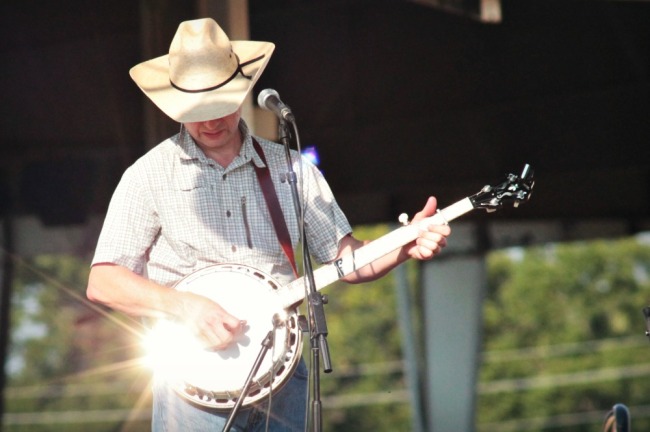 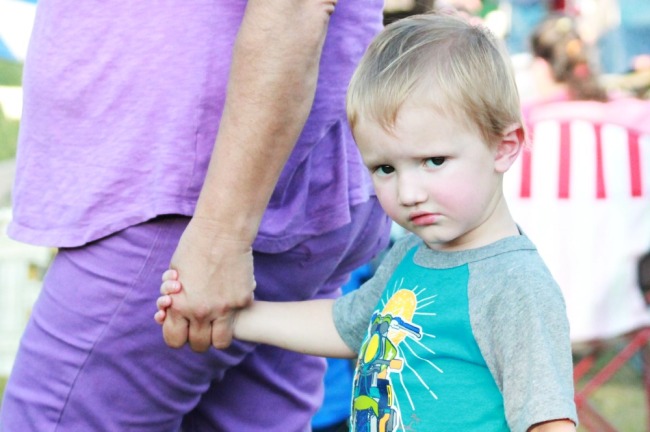 And a multitude of adorable children.

And the constant thread that has run through my entire life: Doyle Lawson & Quicksilver. His band may constantly change, but the sound doesn’t. At the risk of making him feel older than he is, his is literally the first music I can remember hearing growing up. 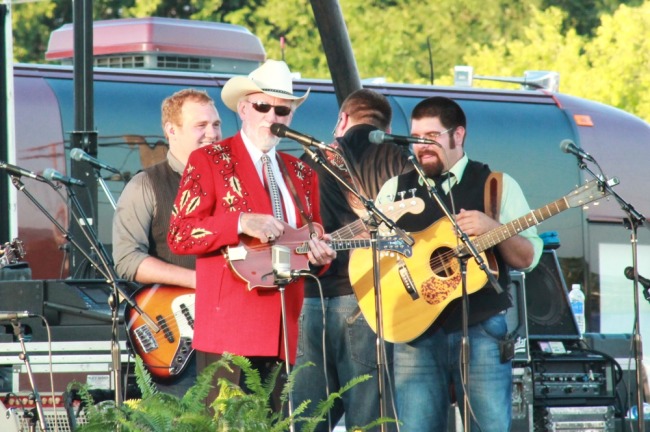 What I read this month:

This was the book I think I remembered least, so it was especially fun to rediscover it. It’s lovely (and a little heartbreaking) to see Clare and Jamie rediscover each other as middle-aged people, brings back a character long-thought dead, and and includes some exotic people and places. Honestly, I’m a little sad to see them head off to America in the next book.

An underground silo that contains an entire world of people: people who have lived in this contained space so long that they’ve forgotten what the larger world outside was ever like. Their silo is their entire world.

Usually when library patrons recommend a book, I’m vague in my promises to seek it out. I have way too much on my own to-read list to start adding the favorites of other people! But there are a handful of folks whose recommendations I trust implicitly, and this came from one such person.

I like sci-fi in theory, but I don’t actually read much of it. Most modern sci-fi leaves me cold and I find it difficult to connect with emotionally. Wool is not the best-written stuff you’ll ever find, and I was initially really put off by the jumping from character to character, but it sure packs an emotional punch. I did really wish for more details about certain things: how many people live in the silo? How big is each floor (all we know there are hundreds of floors and it takes days to take the stairs from top to bottom). Speaking of stairs, how did they lose the technology for things like, yanno, elevators?

I don’t particularly like murder mysteries/thrillers that seem to try to include the most grisly/horrific/unusual manners of death possible (I remember one – a Kellerman book, maybe? – that I flipped open randomly only to find a description of a death by means of super gluing the person’s eyes, mouth, and nose shut. Srsly??) This book veered just a little too close to that line for me to be totally comfortable with it, and I also had some serious questions as far as believability, but both the cause of death and the killer managed to catch me totally off guard, so.

I just wanted to sob over this book – I ended up reading this series completely backwards, which was possibly a mistake, but oh, what a beautiful and tragic figure Medraut makes. I really appreciate Wein’s reshaping of the Arthurian landscape – this is probably the most sensitive and well-rounded treatment of these characters that I’ve come across.

New York City, old hotel, crazy family, crazier neighbors, even crazier hotel guests. I loved that the love interest isn’t neatly wrapped up in either book and isn’t the whole focus,  Also, bonus points for not making the “kid who beat cancer” into a perfect child. I appreciate some of Mrs Amberson’s wit but good grief am I the only person that sees what a rude and demanding person she is?! I feel like we’re all supposed to love her, and instead I was always ticked off her lack of respect for other human being’s schedules and lives and wishes.

Incidentally, I really identified with Lola – although obviously I neither have a rich boyfriend named Chip nor a perfect makeup routine.

And I’m pretty sure I liked these better than the Shades of London books.

7. Give It Up!, Mary Carlomagno

So basically, the author is an immature New Yorker who can’t figure out how to socialize with her friends without drinking, has never used the subway because it’s “confusing” and has basically lived such a privileged that life that she doesn’t even realize how privileged she is.

She gave up one thing a month for a year – coffee, chocolate, elevators, taxis (which meant – gasp – walking and using the subway) – and wrote a book about it, as one does. I’ve enjoyed many other such books, but this one was remarkably shallow and uninspiring.

Modern technology is ruining everything … sort of.

I’m not nearly so pessimistic, but he has some good points, and it’s certainly interesting reading.

And then there’s this food for thought: “…the more forcefully we attempt to stop the passage of time, the less available we are to the very moment we seek to preserve.” I struggle with this, especially when traveling: how much do I record/write about/photograph the moments, and when do I sit back and just enjoy them? I forget the details so very quickly if I don’t preserve them, and yet by the act of preserving, I take myself out of the moment and may never fully get to live them.

(hint: I lean towards the preserving end. I can’t help it. DOCUMENT ALL THE THINGS.)

And I loved this idea that mental stress is the result of unresolved loops – “every individual thing we haven’t figured out sits on our awareness like a live, ticking clock. Every unanswered question and every task we haven’t yet scheduled stays in the most active part of our brain, waiting for an answer.”
So the trick to reducing stress is to close as many of these loops as possible – not necessarily do them all, but make a plan for getting them done. His example was that if you know you need to go buy milk, but do nothing further about it, that’s an open loop. But by deciding when you will go to the store, and which store you will go to, you are closing the loop. You now have a plan, and not just an open-ended “I need to buy milk.”

Another great book (and the writing just keeps getting better, which is good, although there are still too many sentence fragments), but it rang just a bit false to me – possibly because Child is an Englishman, and this book is set in Texas. Some small details are spot-on in a way I wouldn’t expect someone who hasn’t live there to get, but others seem a little … stereotyped?

I know a lot of you really really love this book, so let me preface this by saying: I think if I had discovered it at a different time (younger, perhaps, or during a regency kick) I would have liked it a lot better. I found nothing wrong with it, I just didn’t love it the way that you did. It’s me, not the book.

May I say though, how absolutely delighted I was to discover after the fact that the authors actually wrote it in letters, without knowing ahead of time what the other would write? So clever!